Or more accurately, Lee Child Meets Colin Campbell.
Back in 2013 before the first Jim Grant thriller, Jamaica Plain, came out, I was in an awkward position. Because James Grant is Lee Child’s real name and I didn’t want Jack Reacher coming after me for using it. Thankfully, when I asked Lee he said, “Go for it,” and even consented to do an interview for Crimespree Magazine. Now that Jamaica Plain has been relaunched by Down & Out Books we were going to include the interview at the back of the book, with kind permission of Ruth Jordan at Crimespree, but page count dictated we leave it out. So here it is in its entirety. Maybe it should be called, JAMES GRANT MEETS JIM GRANT. 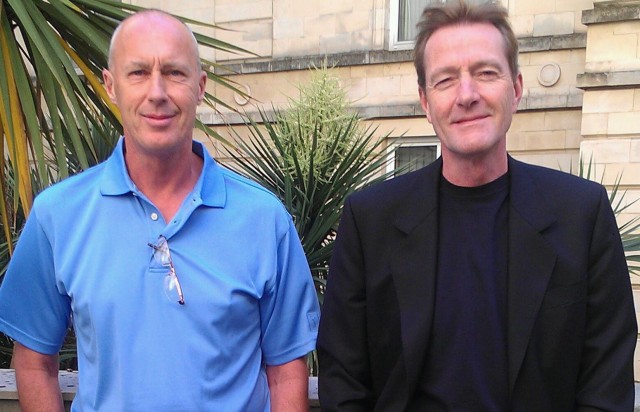 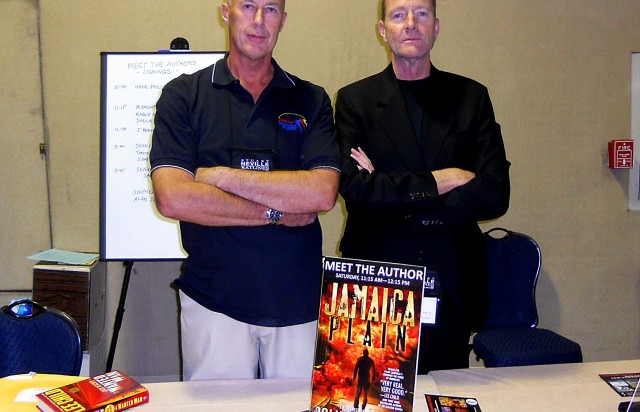 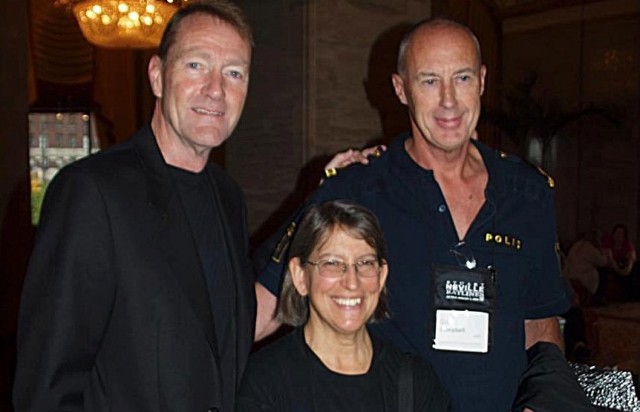 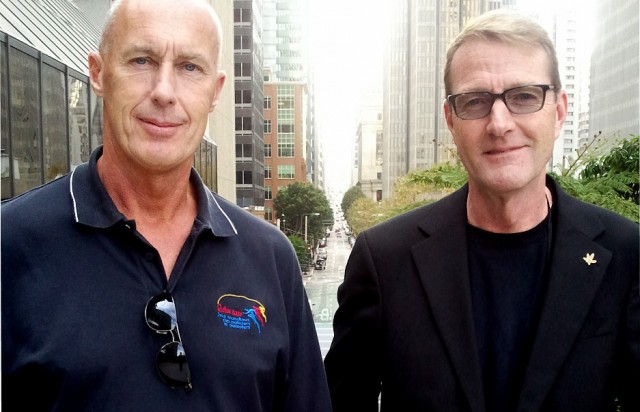 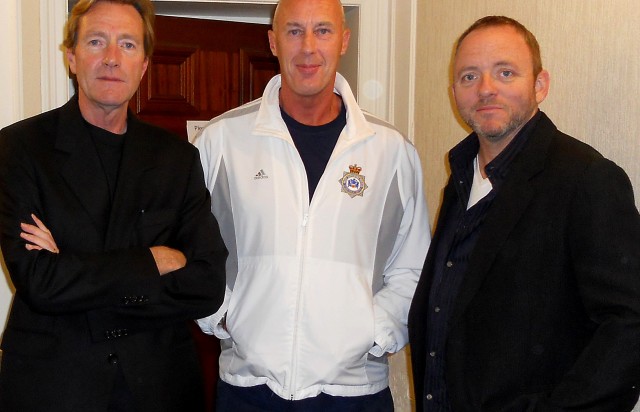 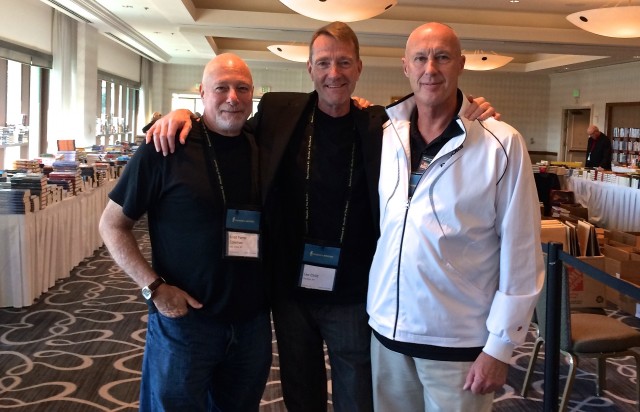 Two English authors. Both writing thrillers set in America. Two very different career paths. Lee Child wrangled the small screen at Granada Television. Colin Campbell wrestled criminals on the mean streets of Yorkshire. Child might argue that Granada Television had its fair share of shady characters too. Campbell joined the police on the back of small screen cop show The Sweeney. “I knew detectives who modeled themselves on The Sweeney. All that hard talking swagger. Or maybe it’s just that The Sweeney got it right copying real detectives.

After 30 years as a police officer Campbell has now joined the ranks of UK fiction writers storming America with Boston set thriller, Jamaica Plain. His early novels explored the life of English uniform cops on the frontline and Through The Ruins Of Midnight caught the attention of Lee Child. “Lee gave me a nice blurb after reading that one, and I’ve pretty much been stalking him ever since. At Bouchercon and Left Coast Crime and the like. I’m surprised he doesn’t hide when he sees me coming. But then again, Reacher doesn’t hide from anything.”

Lee: You were a copper all your life in a fairly hardscrabble part of Northern England. I’ve heard from other cop writers they have to clean up their experiences for books. Real life is too disgusting for fiction? Do you agree?

Colin: Hardscrabble … yes, that would describe it. Getting even worse since I retired. At least nobody tries to shoot or stab me when I’m writing. The answer? Yes and no. The first crime books I wrote were pretty much exactly the way it was. Through The Ruins Of Midnight was based on a night shift from hell I worked a day after Christmas. Blue Knight White Cross actually happened. A mate of mine had his skull bashed in with a paving stone and I had to sit with him in hospital in case he woke up and gave a dying declaration. He did wake up and the first thing he said was, “Well I’m not a virgin anymore.” Referring to the doctor’s anal finger probe. For me it’s not so much about toning down the gory stuff as some things are just too unbelievable. If you put them in a book people would say, “Oh come on, that’s a bit far fetched.”

Lee: So how do you feel when you read police procedurals written by people who weren’t cops? I know plenty do good research, but plenty don’t. Me, for instance.

Colin: I can’t read English crime novels, no matter how good they are. I always think what I would have done, or why the police don’t talk like real coppers. I prefer the US versions, probably because I’ve never worked there or know their procedures. Joseph Wambaugh was a big influence with The Choirboys. Uniform cops in the trenches. His Hollywood Stations books too. Then there’s the Harry Bosch novels. Although Harry could do with lightening up a bit. I never met a policeman who takes it all so personally. Only way to reach retirement age is not to take the job home with you. Some of the things I’ve seen. Make your hair curl. When I had hair. Take that home to the dinner table and you’d put the entire family off their feed. And then there’s this Jack Reacher guy. I wouldn’t have minded having him on the shift that night after Christmas.

Lee: So why now set a book in the US?

Colin: That was a business consideration, trying to break into the American market. The early UK books were very much my tribute to the boys in blue. Police books about real coppers, on the front line, dealing with everyday shit, not some Chief Inspector chasing serial killers. When I met Donna Bagdasarian, my American agent, she suggested writing something set in America to broaden my audience. At first I said no. I didn’t think I could do what you did and write an American character. Then I thought about it, and remembered being sent across the Pennines one night to interview a prisoner and eliminate him from a crime. From Yorkshire over to Lancashire. And I thought, what if they sent this cop to America for the same reason? Of course that would never happen. West Yorkshire Police barely stumped up for the petrol to Lancashire.

Lee: But that’s what fiction is for, right? Lancashire becomes the U.S. Tell us what happens.

Colin: In Lancashire or Boston?

Colin: Okay. Well, Jim Grant is sent to Boston on a kind of holiday assignment. Partly to clear up an old case but mainly because he’s in the shit back home. Get him out of the way. He’s interviewing this petty thief, Freddy Sullivan, when somebody roles a grenade into the room and splatters Sullivan all over the ceiling. Grant survives and starts looking into Sullivan’s activities. Leading to lap dancing clubs, high-class prostitution, and an armed standoff at a dusty gas station. With the help of a sexy lady, a troubled ex-Marine, and a veteran detective, Grant finds himself in a race against time to save Boston from something he didn’t see coming when he started the interview.

Lee: What drives you to write? Everyone knows retired cops get fat pensions, so you could just sit on your butt all day and watch DVDs.

Colin: Blu-rays. And using the words fat and butt in a sentence about retired cops is a bit insensitive. I’ve only put on a bit of weight. We don’t have the cops and doughnuts culture in the UK. More like fish and chips. As for writing. I just love it. It’s an extension of reading, only better. Because I’m creating the stories I’d like to read. I love words. I love the rhythm of a sentence. I love using my imagination. It’s what makes reading more enjoyable than watching a movie. The reader creates an equal part of the story as the writer. Somebody once said that. It wasn’t you, was it? Anyway, somebody once said that if you sit a hundred people in front of a movie they’ll all see the same film. Give the same hundred people a novel to read and they will all see a different picture in their heads. It’s just fantastic. I’ve had more books rejected than published but I can’t see myself not writing. Of course it does mean I’m sitting on my butt all day. You got that right.

Lee: My grandma lived in the town where you live, so I knew it very well, up until twenty years ago. How is it doing?

Colin: It’s all charity shops and pensioners now. The river’s still nice. Woolworth closed down. The police station is only open part time. Can you believe that? If you get run over after dark the patrol car has to come from ten miles away. After talking to your brother Andrew I think I know where your grandma used to live. That’s not there any more either. But we do still have the tennis club in Grove Hill Park.

Lee: Why do you wear shorts so often?

Colin: All the time you mean? Because you’ve cornered the market on being the man in black. You and Michael Connelly. And Johnny Cash. When I turn up at a convention these days it’s always, “Oh, it’s that English guy in shorts.” I wore long trousers to the banquet one time, and nobody recognised me.

Lee: I’m not buying that. I think it’s because you’re always trying to convince people you can play tennis, even though you’re a clapped-out hundred-year-old. Can you in fact play tennis?

Colin: Oh, this is embarrassing. The blow my own trumpet moment. Yes, I can play tennis. I’m a qualified tennis coach. I’ve played for the West Yorkshire Police in the UK National Championships and still compete in the World Police/Fire Games every two years. It’s like the Olympics for emergency service workers. Over five thousand competitors in fifty-odd different sports. I won the gold medal in Adelaide and Quebec and got the silver in New York last time out. Playing against other clapped-out hundred-year-olds.