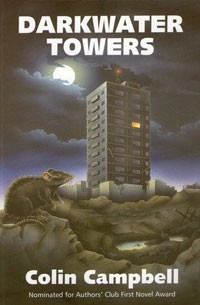 Read a Chapter:
Click on the book cover to read a chapter from this book

This novel can be purchased via:

It is Christmas Eve in Darkwater Towers, a near derelict block of flats turned into a retirement home for the down-on-their-luck folk with no money, and no relatives who give a damn. The one man who can help them, Theobald Wolff, is wrestling with cancer – the monster that took his wife several years ago – and struggling with the guilt of not having ended her pain when she’d begged him to do so. Her picture reproaches, yet sustains him, but he is on the brink of a new relationship.

Apart from the crumbling tower block, where the residents live terrified of their surroundings, they have to suffer the bullying caretaker, Mick McCracken, who has taken away any dignity they have left. But something else, more sinister, has moved into Darkwater Towers. Something dark and dangerous and hungry.

As Christmas Eve creeps into Christmas Day, Theo must shoulder his responsibilities alone, and put his past to the sword, or be damned trying..