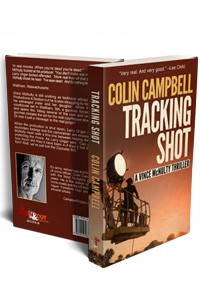 Publisher: Down & Out Books

Read a chapter
Click on the book cover to read the first chapter from Tracking Shot.

Waltham, Massachusetts
Vince McNulty is still working as technical advisor for Titanic Productions in Boston but he is also struggling to reconnect with his estranged sister and her daughter. While filming on a courthouse set in Waltham, MA, a gunman forces his way in and opens fire, killing several of the cast and crew. Did the gunman mistake the set for the real courthouse down the road? Or was it just a message to the real judge? When the production is shut down, Larry Unger realizes that secondary footage and the cameraman are missing and Vince McNulty must walk a fine line between helping the police and protecting the movie. As Larry Unger said, “Can you imagine how much shit they’d have been in if they’d lost the Zapruder film? Well, we’ve just lost the Zapruder film.”