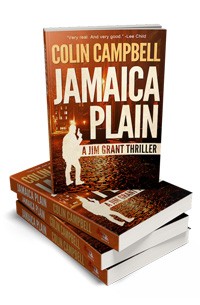 Sex and violence and a deadly race against time. First thing Jim Grant does when he lands in Boston is buy a map. Second thing is get laid. Third is almost get himself killed interviewing Freddy Sullivan, a prisoner Grant has flown all the way from England to question. Beautiful strippers, violent heavies, and an armed standoff at a dusty gas station.

All pale into insignificance when Grant discovers the truth about Sullivan’s dangerous sideline. With the help of troubled ex-marine John Cornejo, the local knowledge of Boston detective Sam Kincaid, and the sensuous ministrations of Terri Avellone, Grant must survive being shot, stabbed, and blown up to save Boston from a catastrophe he never saw coming when he bought that map at Logan International.