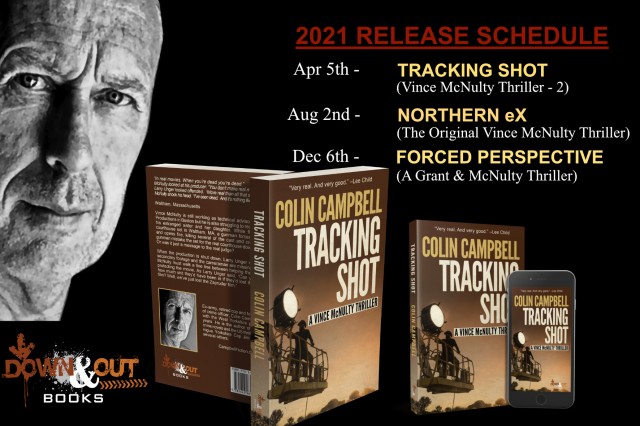 Not Down & Out, Onwards & Upward
Down & Out Books have announced the release schedule for 2021. Here is what to expect and when to expect it.

TRACKING SHOT April 5th 2021
Vince McNulty 2. Waltham, Massachusetts.
Vince McNulty is still working as technical advisor for Titanic Productions in Boston but he is also struggling to reconnect with his estranged sister and her daughter. While filming on a courthouse set in Waltham, MA, a gunman forces his way in and opens fire, killing several of the cast and crew. Did the gunman mistake the set for the real courthouse down the road? Or was it just a message to the real judge? When the production is shut down, Larry Unger realizes that secondary footage and the cameraman are missing and Vince McNulty must walk a fine line between helping the police and protecting the movie. As Larry Unger said, “Can you imagine how much shit they’d have been in if they’d lost the Zapruder film? Well, we’ve just lost the Zapruder film.”

NORTHERN eX August 2nd 2021
The Original Vince McNulty Thriller. Ex vice squad cop Vince McNulty copes with life outside the force by visiting the Northern X massage parlours he used to police. Until several girls go missing. All from parlours that McNulty has visited. When one of them turns up dead everything points to a regular customer being involved. And McNulty is top of the list.

FORCED PERSPECTIVE December 6th 2021
Loveland, Colorado.
Brings the Grant and McNulty series together. Grant uses McNulty and Titanic Productions to set up a sting in Palm Springs by faking auditions for extras but only sending invitations to wanted criminals. The plan works, with a little trouble. But it was a dry run for the main person they want to arrest. A crime lord movie buff in Loveland, Colorado.

Look out for more news as it arrives. Happy reading.